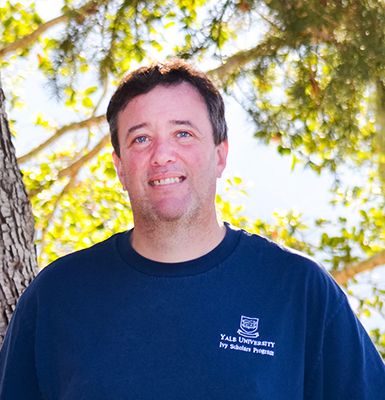 If you were to walk into Nick Coburn-Palo’s classroom, you might see students engaged in a simulation on the North Korean nuclear talks, debating the legitimacy of the use of the Atomic Bomb, or absorbed in a philosophical discussion on when, if ever, it is permissible to tell a lie.  The underlying theme of his pedagogy is his interest in the dilemmas faced by thinkers and leaders across time and what lessons we can draw from their responses.
York welcomed Nick to the faculty in 2018. He brought with him thirty years of teaching experience, a Ph.D. in Political Science from Brown University, and a decade of experience working with the United Nations.
He began his career teaching speech and debate teacher, and he was successful in coaching three national champions. He has also taught history, philosophy, and public speaking at a number universities and high schools, including Yale, Brown, Taipei American School, the College Preparatory School (Oakland, CA) and Pinewood School (Los Altos, CA).
Mid-way into his career, he was asked to come to Korea to train diplomats who were preparing to embark on trade missions to the U.S. and Europe. This dovetailed into a position working with the United Nations (UNITAR), training diplomats in argumentative writing, speechwriting, and negotiation strategies. This has included significant work with the U.N. Security Council and the African Union.  He currently teaches online for UNITAR in the graduate program in International Relations at the University of Catalonia. Nick brings this experience into the York classroom, and our students learn some of the same skills and participate in some of the same simulations as UN diplomats and graduate students.
In recent years, he has lectured on multiple occasions in South America on Diplomacy and has taught workshops for leading European economic think tanks, including preparing business leaders for negotiations with the Chinese on aspects of the Belt-and-Road Initiative.
Nick teaches Modern World History, Asian History, and Philosophy at York. He also leads a philosophy club, advises Model UN, and serves as department chair.
In his free time, he loves reading about history and world affairs , shooting pool, international travel, and watching sports (especially soccer). In fact, he likes sports so much that he wrote his dissertation on athletes-turned-politicians.
Nick is tremendously delighted to be at York, as he has never been at an institution where people treat each other with kindness on such a constant basis as he has encountered on the York campus.
Back

9501 York Road
Monterey, CA 93940
Phone: 831-372-7338
Fax: 831-372-8055
We inspire and prepare a diverse community of creative, independent thinkers.
Since 1959, York School has created an exceptional college-prep experience for our youth: inspiring them to develop intellectual curiosity; challenging them to create and try new things; and preparing them to be passionate contributors in college and in life.
York School is committed to equal opportunity in educational programs, employment and campus life. The School does not discriminate on the basis of age, ancestry, color, disability, gender, marital status, national origin, parental status, race, religion, sexual orientation, or veteran status in any access to and treatment in School programs and activities.